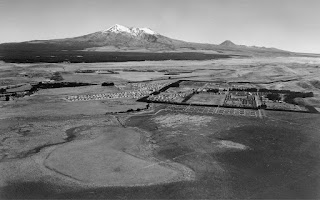 If you have been visiting this now revamped site in the hope of a new post, then you have struck it lucky. For the last two years or more I have been putting together a new book - Home Base. It is a memoir of the three years I spent as a New Zealand Army Regular Force Cadet, living  in barracks at Waiōuru military camp. The work is a sequel to the highly rated No One Home (Mākaro Press, 2018), which records my early and somewhat chaotic boyhood, and ends at the point I board the Auckland to Wellington overnight express in early January 1964 on the way to my boy-soldier life. I was 15, which at the time, was the youngest age one could join the Army. 140 other recruits of a similar age entered camp at the same time.

The work provides a personal snap-shot of the years 1964 - 1966 and distils the essence of what life was generally like for each annual intake of teenage boys who flowed through the Regular Force Cadet School from 1948 - 1991. Like No One Home, Home Base uses more than text to portray memories of time, people and place. Employing a bricolage approach, the work tells its story through short prose, poems, photos, sketches, maps, diary excerpts, and images of contemporary artefacts, memorabilia, and documents.

Home Base chronologically unfolds my Cadet years, but is more thematically structured than No One Home. Themes include arrival, learning the ropes, kit and caboodle, daily routine, marching and parading, minders and carers, leave and time-out, and aspects of barrack life. Vivid and sometimes humorous vignettes are used to gradually lay bare my army home and its harsh physical and social environment. Ever present are the volcanoes that form Waiōuru’s backyard, with Ruapehu in particular writ large in the lives of the cadets. Also woven through the memoir’s narrative is the story of how my individual post-cadet future came to be shaped and secured through the interest and actions of an Army benefactor.

Home Base will appeal to those who read life-stories to learn about and be reminded of times before and to an audience who enjoys reading about the New Zealand Army's past. It will also interest those who have served (or who are still serving) in the military in some capacity. Rather than being solely an account of one person’s memories of a particular life-period, Home Base will pique the reader’s curiosity and attention through the variety of literary and graphic forms that it employs and by revealing the uniqueness of a place in New Zealand most people only experience while passing through it.

The book is due for publication by The Cuba Press (Mary McCallum) in October 2021. Before then, I'll advise when and where book launches will be and post some more extracts.

Here is a taster from Home Base:

We were marched on and marched off

We were marched in and marched out

We were dressed up and dressed down

We picked up our dressing and lost it again

We marched paces forward or paces back

We stood at ease and stood easy

We stood to attention and stood around

We numbered from the right but not the left

We were wheeled in and wheeled around

We marched in quick-time

We formed up in columns of three

We moved to the right or left in threes

We got on parade and got off it

We changed step and marked time

We fell out and fell in

We advanced in review order

We hurried up and waited