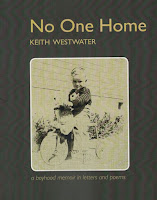 No One Home came into being on 28 February, 2018. It was reviewed by S.J. Mannion in takahē magazine as follows:

No One Home is .... a miscellany and an odyssey. Though slight, it calls for close attention and brought to mind Wordsworth’s definition of poetry as ‘… emotion recollected in tranquility’.[i] It hums with that tempered sort of poignancy and motive.  Feeling contained by form resonates with a limpid simplicity:

Why do you still dig?/They all inquire. /to find what I lost when I had -/A mother and father,/a bucket/and spade.

No One Home is a seeking, examining work, as concerned with absence as it is with presence, and the losses in both.  Absence of the mother etches the central motif.  Everywhere, even in flowers.

Their scent is your shield of love
their leaves, the colour of your eyes
their petals, the clothes you clad me in
as child and as man.

In his epilogue, Westwater admits he must ‘still grieve for possibilities which ceased to be …’ (Epilogue, p 85). The absence of Avis Elaine, the poet’s mother, is a profound and lasting loss.  And the largest presence in the book.

There are lesser losses too.  Losses of presence. The loss of his father, to fecklessness, cowardice and the dread step-mother.  ‘Never, never talk to your father unless I say you can’ (“Maw’s Laws”, p 51)   A true termagant, her heart is ‘as black as a manxome’s byre’; ‘with jaws that bite and claws that catch / she begat the Jabberwock.’ (“Brief for the part of Maw”, p 47).

The literary allusions (Lewis Carroll; the Brothers Grimm and the four-act Hansel and Hansel and The Widow Maw) remind us that this is an old story. The lost child.  And while the style is spare, there is a mournful clarity in lines: ‘Waiting forever/ outside a pub – Dad is booking his bets’. (“Three Haiku”, p 38).  There is also the loss of the wider family – the Aunties, sources of comfort and respite – through itinerancy and neglect.  No One Home is permeated with longing, for the return of love.

The epistolary and visual touches – personal letters open the book, hand drawn maps populate the interior – add further layers. Letters function as both hook and anchor, compelling a return at the end, well-suited to a linear read. One letter, from his soldier father to his sister, is youthful, ebullient.  Another, from his pregnant mother, to her sister, is anxious, but cautiously hopeful.  Her husband is already in ‘serious financial difficulties through gambling’ (p 19).

The maps add an intensely personal appeal. Tiny photos accompany them, curiously delicate and evocative, as are the small drawings. Together they draw the terroir of the poet’s childhood illustrated with a grace of line …

T’is a ‘well done sum’ indeed: the pacing of poems and prose, and the placing of maps.  The importance given to the poetry of found objects, letters, articles, interviews. Assembled thus, and elegantly produced, the book has a sober and quiet beauty, ‘moments of glad grace.’ [ii] No small thing then, and a fitting tribute to Avis Elaine.

[i] Lyrical Ballads, with a Few Other Poems is a collection of poems by William Wordsworth and Samuel Taylor Coleridge, first published in 1798; repr. 1800.

Sile J Mannion is a published poet. She comments: ‘I’m an Irish writer transplanted to Christchurch.  When I can, I write and, when I can’t, I read’.