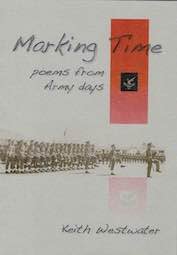 Marking Time: poems from Army days is a chapbook that I self-published in 2008. The collection contains 10 poems that are centred on memories and recollections from my days in the New Zealand Army. Five of these poems later appeared in Tongues of Ash and also some in Home Base.

The cover, which I designed myself, includes a photo of the Regular Force Cadet School’s December 1966 Graduation Parade. Other photos appear on pages throughout the work, which is printed on high quality paper. I used the imprint ‘Thing One and Thing Two Publications’ for the collection.