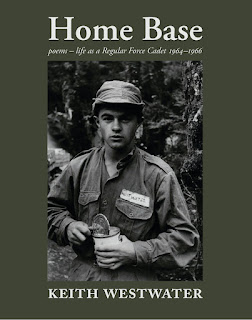 Home Base was published in November 2021. In the prequel to this book, No One Home, Keith’s stepmother ‘Maw’ gives him an ultimatum – at fifteen he either leaves school and home to work, or he joins the army. So, Keith departs Auckland and reports to the Waiōuru military camp, enlisting as a Regular Force Cadet.

Home Base is a snapshot of Keith Westwater’s boy-soldier life in the New Zealand Army during the 1960s. From a motherless and peripatetic childhood in No One Home, Keith finally finds a place to call home: underneath Mount Ruapehu’s shadow and amongst his fellow cadets.

From spit-polished ‘brightly black’ boots to doing ‘the marchie marchie’, Home Base is a candid and often humorous look at the lives of Regular Force Cadets. It’s also a memoir of Keith’s adolescence depicted through handwritten diary entries, photographs, maps and poems.

It's an inventive fusion of some 80 pieces: verse, the Army's unique style of correspondence (“You will....You will be...You will....”), visual images, diary entries, vocab lists, menus, 1964 Top Ten list, historical footnotes from his three years as a cadet… The writing is accessible, uncluttered. He's a tidy poet: lines fit cleanly together; structure is firm; images restrained and relevant… You'll like the wryness and parodies and enjoy the trade secrets – how to bring boots to a high gloss by setting fire to the polish. (Bandages sometimes resulted.) You may remember the times of winklepickers, Brylcreem and Old Spice. “It wasn't such a bad place,” the author concludes and you should also recognise the quintessential male New Zild voice of that phrase.

It packs a lot into its 184 pages…There is so much in this that is familiar to me: the clanking and clanging of the steam heating pipes in the barrack blocks at night, the realities of drill and spit-polishing boots; the faces of those who commanded you and who served with you. People who suddenly appear in front of you when Keith’s words flood you with memory. As he puts it.

‘With an old soldier-boy’s hindsight

I buff the boots of my past

Get ready to march on.’