No One Home launch invitation 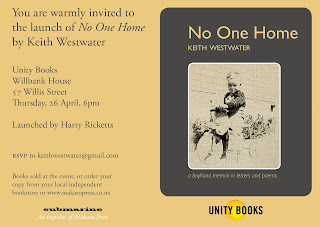 The launch of No One Home is all lined up - I would love to see you there if you can make it!
Posted by Keith Westwater at 7:48 PM No comments:

The sea is calm to-night.
The tide is full, the moon lies fair
Upon the straits; - on the French coast the light
Gleams and is gone; the cliffs of England stand,
Glimmering and vast, out in the tranquil bay.
Come to the window, sweet is the night-air!
Only, from the long line of spray
Where the sea meets the moon-blanch'd land,
Listen! you hear the grating roar
Of pebbles which the waves draw back, and fling,
At their return, up the high strand,
Begin, and cease, and then again begin,
With tremulous cadence slow, and bring
The eternal note of sadness in.

Sophocles long ago
Heard it on the Aegean, and it brought
Into his mind the turbid ebb and flow
Of human misery; we
Find also in the sound a thought,
Hearing it by this distant northern sea.

The Sea of Faith
Was once, too, at the full, and round earth's shore
Lay like the folds of a bright girdle furl'd.
But now I only hear
Its melancholy, long, withdrawing roar,
Retreating, to the breath
Of the night-wind, down the vast edges drear
And naked shingles of the world.

Ah, love, let us be true
To one another! for the world, which seems
To lie before us like a land of dreams,
So various, so beautiful, so new,
Hath really neither joy, nor love, nor light,
Nor certitude, nor peace, nor help for pain;
And we are here as on a darkling plain
Swept with confused alarms of struggle and flight,
Where ignorant armies clash by night.


Every now and then I reach back to a poem which inspires me. Dover Beach is one of these.  Its haunting lyrics link sounds of tide and sea from an English beach scene on a moonlit night to a crisis of faith which Matthew Arnold was experiencing at the time. There are more than one or two lines that are still quoted today, though it was written in 1851. Matthew Arnold was a son of Thomas Arnold, who while headmaster of Rugby School, is credited with having a lasting effect on the development of public school education in England. (I bet you thought I was also going to say something about a certain oval ball game’s birthplace.)

News of No One Home’s book launch - it is set for Thursday 26 April at Unity Books, Wellington from 6.00 - 7.30 pm. A Facebook event page will be set up soon (where you can indicate whether you are coming) and email invitations will also be sent out.

Posted by Keith Westwater at 6:24 PM No comments:

I only went the once –
an expat's visit,
claiming a rite of passage
I thought was owed.

Nineteen sixty four, sixteen
kitted out
in all the right gear –
stove-pipe trou,

Hoping a girl from my past
remembered me,
liked me enough to dance –
no such luck.

So I joined the bunch
of wallflower boys,
caught up on goings-on –
who was seeing whom,

watched the rock'n roll
extroverts perform,
realised my chances
of emulating them

were hostage to Peter Posa,
'She's a Mod',
and a faded avatar of
my Papatoetoe past.


While I was sourcing images for ‘No One Home’, I reconnected with Jenny Clark – we were classmates at primary and intermediate school. Jenny is now a mainstay of the Papatoetoe Historical Society, who provided me with images of the old St Georges Anglican church and the Wyliie Road orphanage, which I converted to sketches for my book:

At the same time, the Historical Society was putting together a display of memorabilia relevant to the Papatoetoe Town Hall, which is celebrating its centenary. I wrote the 'Town Hall Dance' poem for inclusion in the display, which the Society then photographed and produced a set of four postcards from – see the post card with the poem in it below. if you would like to order a pack (or more) of the postcards at $5 a pack, contact Jenny at jennya.clark@xtra.co.nz 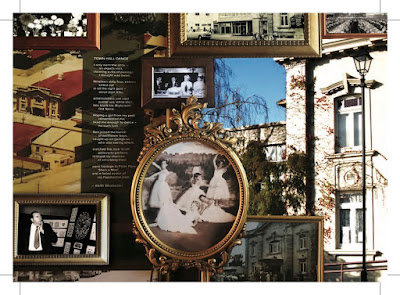 Posted by Keith Westwater at 8:12 PM No comments:

'No One Home' in its bundling box 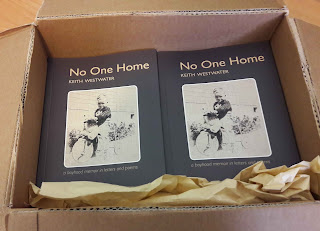 There’s nothing quite like seeing a collection of poetry in its new-born published glory. What were once promising images and text on screen can now be cradled carefully, cooed over, and have its cover and pages, if not quite caressed, at least given ‘Oh, wow!’ compliments.

This happened last week for me with the delivery of my latest work, No One Home – see sidebar – from the printer (Wakefields Digital) to the publisher (Mākaro Press).

Once the distributors have had a chance to get the book ‘out there’ over the next two or three weeks, we will have a proper christening. At the moment this is looking like it will be in the second week of April, but I will post the details as soon as they firm up.

Posted by Keith Westwater at 12:34 PM No comments: